PH Racing Club’s men’s masters team consolidated their lead in the East District Cross Country League at Broxburn Academy on Saturday.  In the second of three fixtures over the winter season they finished second on the day by a single point to Metro Aberdeen.

Those familiar with the Broxburn event will have noticed that the route was different to previous years, with some parts run in reverse and a narrow start which lead to a lot of bunching among those who didn’t push up to the front at the start.  Underfoot conditions were challenging as ever and the weather, while not the worst seen there, did not make things any easier.  As usual the men ran three laps while the ladies ran and juniors ran two.

First of the masters team home and sixth veteran was Robert Sellar in 30:59 and he was closely followed by Paul Kieran and Andy Davis, seventh and eighth veteran finishers, in 31:35 and 31:45 respectively.  This gave a points total for race two of 21 to Metro’s 20 and left PH masters with a lead of 19 points over closest challengers Corstorphine going into the final race in Livingston.

Elsewhere the senior men’s team finished in an excellent eighth place on the day and now sit seventh overall in the league.  Sellar, Kieran and Davis were among the counters here too but Mike McConnell managed to separate his older team mates finishing in 31:27.  Colin Somerville (32:26) and Daniel Monaghan (33:01) completed the team of six.  Stuart Tite, Phil Waring, Billy Stewart and Mark Mclean all enjoyed strong runs to back up their club mates. 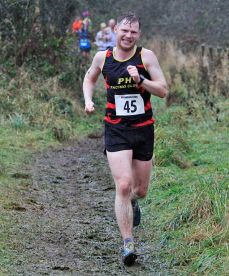 In the ladies race there were just three finishers with Kristin Lownie the quickest in 22:52 for 16th place.  Julie Menzies was 28th and fourth veteran in 23:26 while Clare Graham completed her run in 28:40. 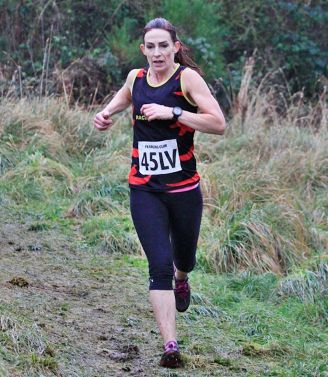 There was a superb turnout for the U17 race with all four members of the club’s small junior section competing.  Andrew Thomson was the leading PH athlete in 11th place, finishing in 20:43.  Jamie Lessels was not too far back crossing the line 17th in 21:14 and John Macdonald completed the PH team in 24:22 to secure fourth position and third overall after two races.

Well done to all PH athletes and thanks once again to Gordon Donnachie for the superb race photos, although Paul Kieran may disagree with this assessment.