The Scottish National Short Course XC Championships returned to Dunnikier Park on Saturday with a healthy contingent of PH athletes in Kirkcaldy.  John Crookston added his sixth national medal of the year, winning bronze in the V60 category, and important points were at stake in what was also the final event of the 2019 PH Racing Club Championship

The senior male and female races were both contested over the same two lap, four kilometre course and were preceded by the three kilometre under 17 race where PH were represented once again by Andrew Thomson, Jamie Lessels and Aaron Bennet.  Thomson, who was recently selected to take part in a Scottish Hill Running weekend camp, was the quickest of the three on this occasion timing at 10:07 in 29th position with Lessels just ten seconds behind.  Bennet also acquitted himself well, completing his run in 11:22, and ensuring the under 17 team finished in 11th position.

With the female Club Championship already decided and winner Kristin Lownie not running, second and third position were still up for grabs between ladies captain Alison McGill and Scottish international Karen Kennedy.  It was Julie Menzies however who perhaps caused a bit of surprise, finishing as fastest PH athlete in 16:36, and showing she can be a force to reckoned with in next year’s competition.  Kennedy enjoyed a sprint finish victory over McGill by only one second, timing at 16:47 and securing second place overall in the Championship with McGill third.  Clare Graham completed the PH team on the day who finished in 14th position.

Last but not least was the men’s race and by then the course was a mud bath in parts.  The men’s Club Championship had gone down to the wire with Jonathan Peebles needing to place among the top five PH males to overtake Paul Kieran and guarantee first place in the competition.  He managed just that, despite recent injury problems, finishing as the third PH male in a time of 14:22.  There was another upset here with Robert Sellar picking up his first ever score of 50 points for a Club Championship event as leading PH male in 14:14.  Michael McConnell, fresh from his third place at last week’s Glen Ogle 33, finished between the two in 14:19 showing he could be a serious contender in next year’s competition should he manage to complete the required eight races.  Kieran was also not far back, timing at 14:27, placing second in the Club Championship in his first full year as a member and securing 18th position for the men’s team on the day. 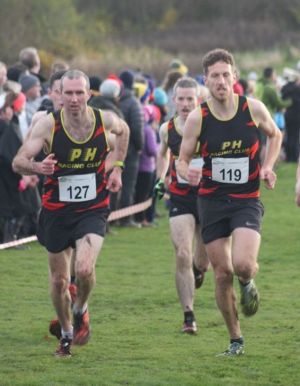 As mentioned at the outset, John Crookston won yet another Scottish Athletics medal to add to his ever-growing collection.  His bronze medal run of 15:41 beat fellow V60 runner Jeff Farquhar of Pitreavie by a single second but was an improvement of over a minute on Crookston’s silver medal winning run on the same course two years ago.  This shows the improvement both by John, and in the strength of the V60 category itself. 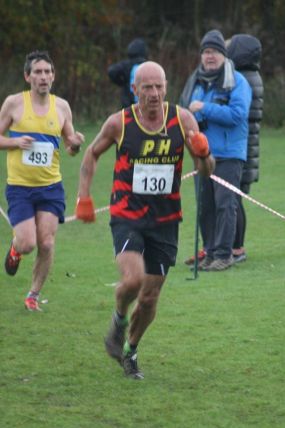 Well done to all and thanks to Fife A.C. and Scottish Athletics for another well organised event.  Thanks to Bobby Gavin/That One Moment for the main photograph showing Julie Menzies and to Karen Thomson, Stevie Ogg and Ross Bennet for the other race photos used in the report.