Sunday saw the inaugural running of the Kirkcaldy Parks Half Marathon with a number of PH athletes to the fore in the challenging heat.  The undulating route started in Beveridge Park, taking in Dunnikier and Ravenscraig Parks and the Prom before returning to Beveridge Park.

First PH member home, in fourth position overall, was Ben Hukins timing at 1:11:54 to win the V40 prize behind race winner and Paralympian, Derek Rae.  Also making the top 10 was Daniel Monaghan who set a new personal best for the distance of 1:17:14 in ninth place.  Robert Sellar finished 11th and third V40 with a run of 1:20:22 to add to his recent run of good performances. 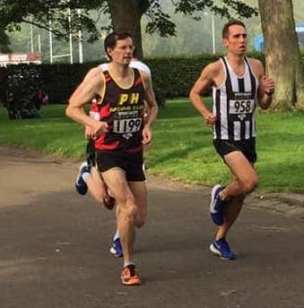 In the ladies race Kristin Lownie finished in second position behind Sheena Logan of Fife A.C. in a time of 1:26:33 with Julie Menzies third V40 in 1:33:32.  Clare Graham finished 4th in the V50 category while Gillian Pratt and Jennifer Caldwell also completed the 13.1 miles. 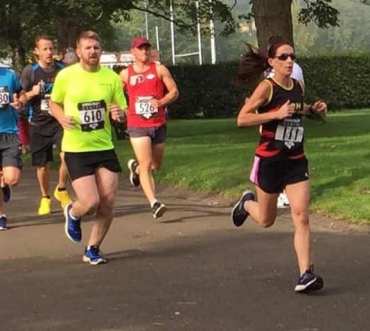 On Friday, Beveridge Park also played host to the final race of the Fife AC/Kirkcaldy Wizards Summer Series, a 5k over the usual route.  Results have not yet been published but Robert Sellar lead the field home to secure second place overall in the series.

Ed Norton was the overall winner of the V60 category.  New PH recruit Jamie Lessels finished third on the night and also in the series overall meaning Aaron Bennet won the junior prize.  Bennet followed this up on Sunday with the prize for first junior at the Robertson Cup Beach Run in Tayport, covering the 5.3k in 23:32.

Also on Sunday was the Wee County Harriers’ Cambus Quarter, a race over an unusual quarter marathon distance.  PH’s Andy Davis had an excellent run finishing second overall in 37.54, while defending champion Andrew Wright, fresh from yesterday’s double medal-winning performance at the Scottish Hill Running Championships, had to settle for third position.

Well done to all and thanks to Jimmy McIntyre and various club members and family for the race photos.