Fife AC Kirkcaldy Wizards’ revamped Summer Series continued on Friday evening with the first running of the Balwearie Trail Race, starting and finishing at Beveridge Park, Kirkcaldy.  This proved to be a tough route with hills, mud and long grass to contend with, as well as some extra on top of the advertised distance to ensure all participants got more than their £2’s worth!

Robert Sellar hit the front at the start along with a group from the host club and had an excellent race finishing in second place behind race winner Ryan Lafferty of Fife AC.  Sellar’s time of 32:30, for what turned out to be just over five miles, gave him a gap of almost three minutes over Fife’s Kevin Wallace in third. 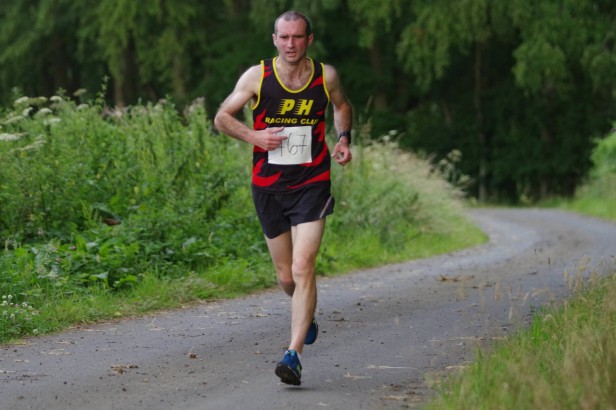 There may be over 50 years age difference between Ed Norton and Aaron Bennet but only 30 seconds separated them here with Norton coming out on top, second V60 and 21st overall in a time of 42:31.  Bennet was two places back finishing as first junior athlete in 43:01 in what must have been one of his toughest races so far.

Last Wednesday at another local trail race, the Newburgh 4.2, there were good runs from the four PH athletes who took part.  Alison McGill followed on from her second place at the Tour of Fife, finishing runner-up in 24:11.  Colin Somerville was fourth overall in 21:58 with Bryan Innes not far behind in 22:50 for eighth position.  Willie Rennie completed the top ten and was first V50 timing at 23:02.

Well done to all and thanks to Wullie Law and Jimmy McIntyre for the superb race photos.  Special thanks to Fife AC/Kirkcaldy Wizards for another two well organised races.