The annual Glenrothes Running Festival saw PH continue the tradition of winning prizes at the 10k race. Jonny Peebles finished 2nd with another great performance and another sub 34 minute run, clocking 33:58 over the tricky 10km course. Dan Monaghan was the next runner to cross the line picking up the 3rd place prize with a very creditable new personal best time of 34:21.

PH runners continued to storm up the last 100m of the track at the Michael Woods Sports Centre as Rab Sellar also set a new personal best of 34:54 finishing 4th overall to collect the 1st V40 prize.

Youngster Andrew Thomson was next, fresh from his 3rd place in the Fife Schools 3000m on Tuesday, placing 20th with a solid time of 37:50. There was another PB for Gordon Lawson who was 4 places back in 24th crossing the line in 38:21. Wright Beveridge was the final PH Racing Club member in the top 30, finishing well in 38:45. David Henderson and Ed Norton completed the PH line up finishing 47th and 67th respectively in the field of around 500 competitors, Ed was 3rd V60 in another fine age category performance.

Under 15 member Aaron Bennet and Allen Marr completed the 4km race at the festival also.

The classic Black Rock ‘5’ was once again another huge success on Friday night with 17 PH members running from the centre of Kinghorn out to the Black Rock and back.

With great running conditions on offer, Ewan Taylor put in a fine performance finishing 20th in a stacked field. Ewan crossed the sand and climbed well back up to the finish in 25:43, one of the fastest Black Rock times seen in a PH vest.

Kristin Lownie was the top performing PH female, placing 9th woman and 87th overall in a time of 29:03.

Martin Butcher, the returning to action Stuart Tite and Willie Rennie (2nd V50) finished closely, all within the top 40 in a huge field of over eleven hundred runners. 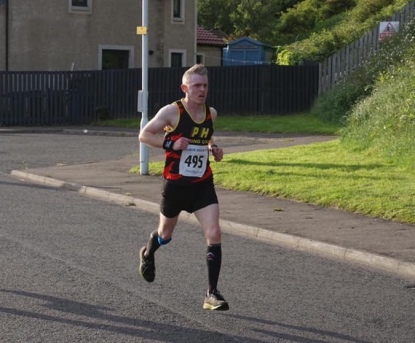 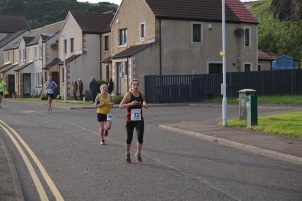 Among the other PH Racing Club members who battled it out on the sand were Gordon Lawson, Wright Beveridge, Graham McInnes, Alan Cockburn, Ian Johnston, Paul Dunning and Darran Neilson. Ian placed 2nd V60 on the night with a time of 30:47.

Martin McNellis, a spectator at the Black Rock ‘5’ on Friday was saving himself for his home town race, the highly praised Port Glasgow 10k. The fast course takes in Porty’s best sites and Martin finished the race in 39:11 to pick up a quality prize of a voucher for a haircut at a local barbershop.

Well done to all competing this weekend and thanks to Allen Marr, Julie Peebles, Iain Taylor and Karen Thomson for the race photographs.