Beveridge Park hosted the second in this year’s 5k series on Friday night and a number of PH athletes were among the placings.

In the ladies race PH’s Hannah Devey claimed second place in a time of 20.10 behind winner Ailsa Cruickshanks of Fife AC.

Martin McNellis was seventh overall and first in the V50 category in 18.34 with Keith Vandermotten third in 19.53. Graham McInnes completed in a time of 19.38 while Ed Norton had to settle for second place in the V60 category with a time of 20.13. 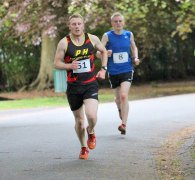 Well done to all and thanks once again to Gordon Donnachie for race photographs.

Membership of PH Racing Club for the 2017/18 season is available now via EntryCentral and will run to 31st May 2018.