Everyone knows the mantra ‘parkrun is not a race’.  Well that is true for 51 weeks of the year but the exception for us is our Festive Parkrun which this year took place at Dunfermline parkrun. 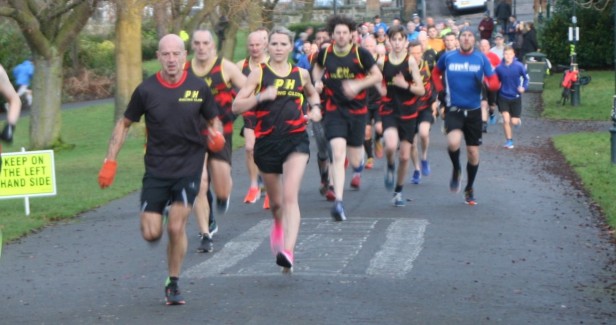 There was an impressive display of club colours from the 24 members running this morning, and almost total domination of the top 20 places.  Paul Kieran ensured that there would be a new name on the male trophy, taking 1st place overall in 17:19, while Kristin Lownie once again took the female title with a run of 19:16 in 5th and 1st lady.  Both recorded new best times for the hilly course. 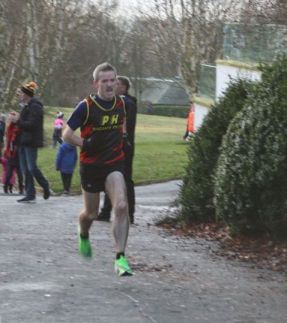 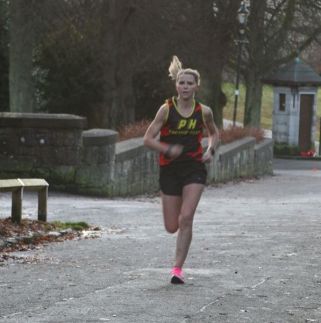 The remainder of the top 10 was made up almost exclusively of PH athletes with Colin Somerville hauling back Jamie Lessels’ early lead to finish 2nd overall in 17:36, Lessels not far behind in 17:43.  The sole ‘interloper’ in the top 10 was unattached Cameron Renwick in 4th place.  Cameron, if you are reading this, you would be very welcome at PH, as would anyone else who would like to give our training a try! 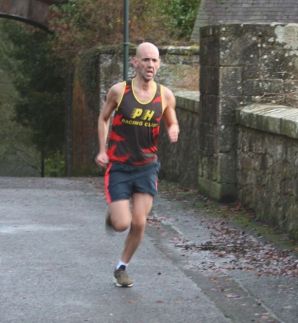 John Crookston continued his remarkable run of form over the last 18 months to take 6th position, and with it the Age Graded title, his time of 19:31 giving an age grade of 83.6%.  Well done to Ed Norton (14th) who also achieved an age grade over 80%, as did winner Paul Kieran.

Iain Taylor, Michael Lindsay, Joe Wilson and Scott Love completed the top 10 but the stream of PH runners did not end there.  Junior athlete John Macdonald finished 11th on his Dunfermline parkrun debut in 20:32.  He was followed by Wright Beveridge who, despite his recent marathon, managed a late surge to stay ahead of Julie Menzies who finished as 2nd female in 20:59.

Darran Neilson, Allen Marr and Aaron Bennet all finished inside the top 20, with Ian Johnston, Zoe Stuart, Malcolm Hammond and Malcolm Smith the next PH finishers.  Michael Stewart ran his first ever parkrun finishing in 23:27 while Ross Bennet continued his improvement with a time of 24:55, just behind Alan Cockburn who is recovering from recent injury.

Well done to all PH athletes for their performances, and thanks to Dunfermline parkrun for putting on such a great event each week and being so welcoming to us this week.  Thanks also to Karen Thomson for the photographs and best wishes to Andrew Thomson who had to pull out mid-way round having been challenging at the front.

The prestigious male and female PH Festive Parkrun trophies will be presented at this evening’s Club Championship Awards/Christmas Party.  We will publish a full report on Club Championship award winners over the coming days.