Last Sunday saw Glasgow once again play host to the Scottish Half Marathon Championships as part of the Great Scottish Run event.  There was success once again for PH Racing Club with two of our athletes winning medals.

Karen Kennedy continued her remarkable season with a bronze medal in the V40 category to add to her ever growing collection of Scottish Athletics medals.  Running her first half marathon in over four years, Kennedy was close to her personal best with a time of 88:18 for the 13.1 mile course through the city. 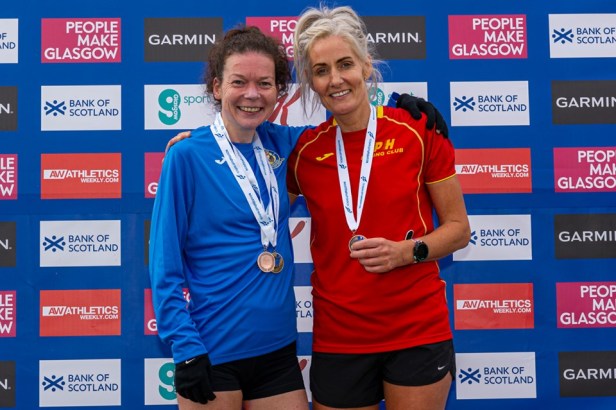 In the new V60 category, John Crookston won a silver medal with a time of 85:26, only 2 seconds behind winner Andrew McLinden of Hamilton Harriers.  It was especially pleasing for Crookston having been first in that category last year only to find there was no prize given.  The new 10 year age bands for road racing medals are certainly welcomed by PH Racing Club as our masters athletes are particularly strong.

While Kennedy and Crookston grabbed the headlines once again there was no shortage of excellent performances by other club members.  First home with 69th position was Paul Kieran, running 75:18 to grab 50 points in the club championship and take pole position with one race left.  First female athlete for PH was Kristin Lownie whose superb sub 83 run last year won her the chance to start with the elite athletes.  This year’s race was not quite that fast but Lownie’s time of 86:09 was still enough to take the 50 points and take an unassailable lead meaning she retains her club championship title.

Dan Monaghan, pictured in the main photo, put in another strong performance of 77:16, just outside his recent personal best from the Kirkcaldy Parks Half while Johnny Cassells and Wright Beveridge were once again evenly matched.  Cassells came out on top by just 3 seconds, dipping under the 80 minute mark for the first time in 79:58.  Beveridge’s run of 80:01 was also an good personal best.

Robert Sellar finished in 81:47 before Phil Waring who was the next to record a PB, of 82:54.  Michael Lindsay also knocked a massive chunk of his best with a new mark of 86:08.  Mark Mclean and Darran Neilson both ran their second half marathon in successive weekends with Mclean showing his consistency finishing ever so slightly slower in 89:35.  Neilson showed his recent training is paying off by lowering his best once again, this time to 91:46.

In the ladies race, Clare Graham was the third PH finisher, also in a new personal best of 1:45:41 and she was followed home by Jennifer Caldwell in 1:54:22.

In the earlier 10k race, Bryan Innes was the sole PH representative, finishing in 37:49.

Well done to all and thanks to Bobby Gavin/That One Moment for the superb race photographs.