The Tour kicked off on the sands of St Andrews with a 4.2 mile out and back beach race. PH’s Tour of Fife debutant Jonathan Peebles took the early lead on the sand risking the tight line and soft sand to make it first to the turn. PH coach and Cambuslang Harrier Ben Hukins came to life in the second half of the race hunting Peebles down to take the victory. Peebles finished strongly in second place with fellow PH athlete and tour debutant Dan Monaghan coming home in fourth. Paul Kieran made his PH debut to cross the line in sixth place and first V40 while Kristin Lownie continued her strong run of form placing fourth female. Ian Johnston finished the first race as first V60 and Malcolm Smith started his tour with one of his best performances on the sand.

Night two saw the tourists reach the summit of East Lomond Hill and tour leader Ben Hukins extended his lead further with a strong run up and an even more impressive descent. Dan Monaghan was third to the top closely followed by Paul Kieran.  The two PH runners battled for places throughout the last kilometre with Monaghan coming out on top to take third place in the race behind Dundee Road Runner, Robbie Dunlop, who cemented his 2nd overall on the Tour. Kristin Lownie put in another tremendous run to leap into 3rd overall behind the Fife AC pair of Heather Anderson and Sheena Logan.

The mid-point of the Tour was a welcome shorter, flatter, run with a 1 Mile Time Trial along the Kirkcaldy Promenade. Heat 1 saw Jonathan Peebles go out very hard worrying tour leader Hukins, who trailed Peebles through the early part of the mile. Peebles ran a phenomenal personal best to begin making time back in the overall standings, completing the mile in a new personal best of 4.51. Heat 2 was an all PH encounter with a straight shoot-out between Paul Kieran and Dan Monaghan, another tight tussle between the two with several back and forths resulting in Paul coming home in 5:00 and Dan trailing by 2 seconds completing the mile in 5.02. Kristin Lownie was fourth fastest female on the night with her 5.34 run. Both Ian Johnston and Malcolm Smith completed the mile in 6.03.

After three races, in the Men’s race, Hukins had a clear lead over Dunlop (Dundee RR) in the standings with Monaghan placing 3rd, Peebles 4th and Kieran in 5th. Only 37 seconds covered the three PH runners in the intense battle for third overall. Ian Johnston’s run held his 2nd overall V60 place at this stage with Malcom Smith placing 10thV50 overall. Kristin Lownie maintained her 3rd place, behind the Fife AC pair, after her strong performance along the Prom.

Glenrothes was the setting for the penultimate day of the tour with tourists tackling the heat for a 5km road race along the Stuart Duncan Memorial Race route. Again, Peebles showed his strength and speed going out hard from the off to finish second, behind Hukins, in 17.02. Kieran and Monaghan battled again with more toing and froing between the pair with Kieran coming out on top for the second consecutive night to finish third in 17.20, with Monaghan three seconds back in fifth. Kristin Lownie pulled off an impressive 19.10 in the hot conditions to line up an intense third place battle in the female race with Alison McGill and Jennifer Cruickshanks of Fife AC going into the final race. 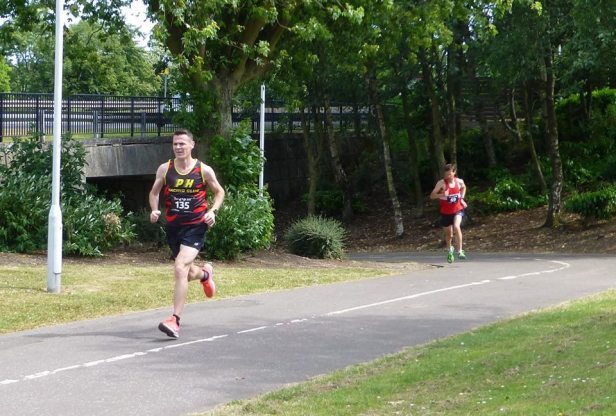 The Tour concluded in the Falkland Estate with an undulating 10km Trail race following part of the 2017 Scottish National Mid Trail Race Route.

Coach Ben Hukins looked very at home on the trails and dominated to take the overall victory. The hot battle between the PH trio was eventually won by Dan Monaghan who pushed hard from the start to take 3rd overall with Paul Kieran finishing 5th in the race and overall to take the Men’s V40 prize. Jonathan Peebles finished in 6th in this final race to secure 5thoverall. 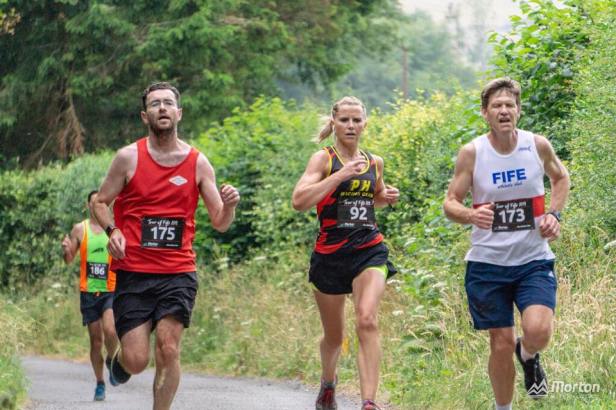 Kristin Lownie did PH proud with her 4th overall, battling it out amongst a strong Fife AC contingent, with Sheena Logan of Fife AC taking the overall prize in the female race.

Ian Johnson won the V60 prize to add another title to his collection with Malcolm Smith also enjoying a good week.