PH Racing Club excelled at Sunday’s Donkey Brae Race.  This scenic race is of mixed terrain over undulating coastal paths with the notorious Donkey Brae climb towards the finish.  The 7 mile runs between Aberdour and Dalgety Bay with PH Racing’s Darren Jubb winning the race ahead of club rival Colin Somerville.

Straight from the gun, Darren and Colin found themselves in a 4 way battle for the win with fellow PH athlete Jonathan Peebles and Paul Kieran (Carnegie Harriers).  Jubb’s surge within the last mile was unanswered as he secured the win, covering the challenging 7 mile course in 40.46 with Somerville timing at 40.51. Carnegie’s Kieran placed 3rd with Peebles crossing the finish line in 4th position. 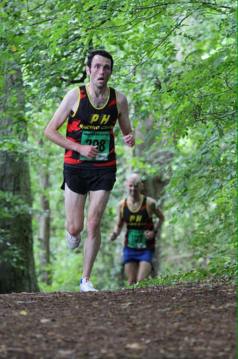 Further down the field, Wright Beveridge, John Cassells and Darren Deas found themselves in a similar battle with Wright coming out on top and the trio placing 10th, 11th and 12th. Veteran athlete Martin McNeills ran a strong race winning the veteran 50 category and Lesley Mealing was the first PH female. Congratulations to Darren on the win and well done to the other 18 PH members on their own personal achievements.

Thanks to Andy Johnston and Derek Johnstone for the excellent race photographs. More Racing Club results and reports can be found on our website phracingclub.co.uk.