PH’s Roger Clark was in form once again winning the Run Garioch Half Marathon in Aberdeenshire on Sunday.  His time of 1:18:51 gave a clear winning margin over 2nd placed David Barclay of Garioch Road Runners (1:20:16) and also secured the prize for first veteran.

Roger told local newspaper the Press and Journal he was happy with his time, though slightly slower than his recent PB in Inverness, due to the tougher course.  They were also interested to hear that the race win was achieved despite an accident just beforehand when his campervan rolled over his foot!

There was further success for Racing Club in the ladies race where Anne Hartmann finished 3rd overall, and 2nd senior, in a time of 1:30:14.  The ladies race was won by Marie Baxter of Garioch Road Runners (1:28:15) with Hazel Wyness of Metro Aberdeen (1.29.38) not far behind in 2nd position.

The Half Marathon, with over 450 finishers, was part of the Run Garioch Festival, also comprising a 10k and 5k.  Well done to Roger and Anne and thanks to the race organisers for the photographs of the Top 3 in each race. 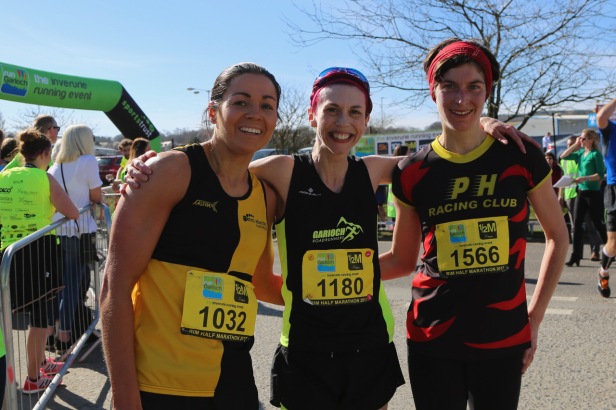