While club mates were placing highly at Largo and Benarty a number of other club members were running other races elsewhere.

On Saturday, Arron Leitch set a personal best of 1:46.19 whilst placing an excellent 11th overall at the Run Mhor Half Marathon at Balquhidder on Saturday.

The route is a mixture of terrain which takes the runners north towards Lochearnhead along the route 7 cycle path. Passing Edinchip Estate, runners continue to the foot of the challenging climb up the switchbacks to join the old railway line at Glenogle. The route continues on a gradual down hill back towards Balquhidder for the final 2km.

There was also the usual activity at various parkruns with new member Michael Lindsay running a new PB time of 20.08 at Edinburgh. At Kirkcaldy, Martin McNellis was just shy of his course best in an excellent 18.51 in 3rd place. Club mates Scott Blyth and Wallace Mitchell joined him in the top 10, Scott in a new parkrun PB time of 20.17.

On Sunday, Andrew Smith was the leading Racing Club member at the Seven Hills of Edinburgh Race followed home by Colin Reynolds while Lorraine and Brian Abbot took part in the Challenge event over the same course. This race starts on Calton Hill taking in Castle Hill, Corstorphine Hill, Craiglockart Hill, Braids Hill, Blackford Hill and Arthur’s Seat before heading back to the starting point on Calton Hill. 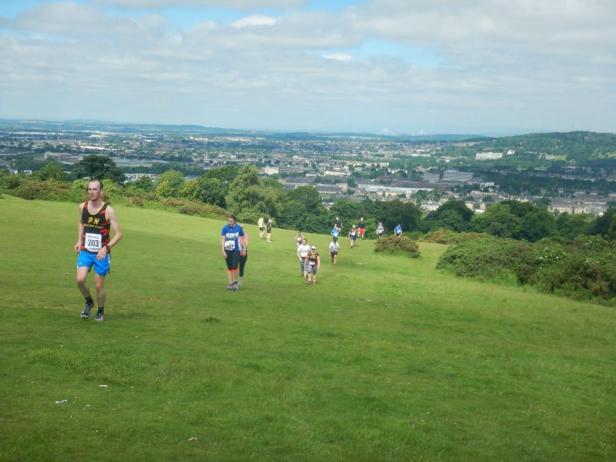