Ten athletes from PH Racing Club started the New Year in the traditional way by heading over to Portobello for the annual 4 mile Promathon.  This event incorporated the first race of the 2019 PH Club Championship with Jonathan Peebles and Alison McGill the first to put 50 points on the board.

Peebles enjoyed a good race with Dan Monaghan before coming out on top with a fine time of 21:31 for 14th place.  Monaghan was not far behind in 17th timing at 21:50 with Colin Somerville taking 20th position in 22.09.  Iain Taylor put in a strong performance to clock 23:42 while Ian Johnston, Niall Balloch and Jason Buttery also bagged some early championship points. 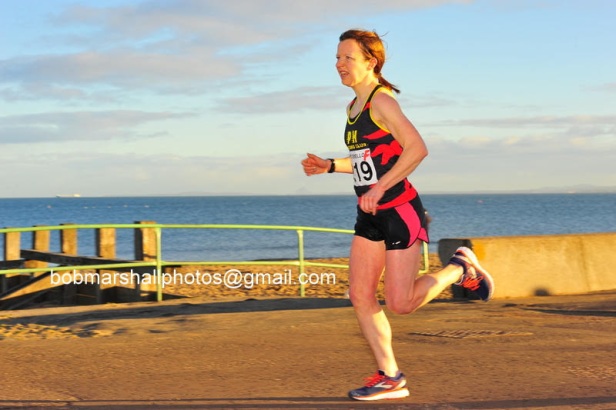 In the ladies race there was a good battle for places 2 to 6 with Alison McGill (pictured) the top performer for PH in third with a time of 23:22.  2018 Club Champion Kristin Lownie was fifth female, only 7 seconds behind and Karen Kennedy finished second V40 in 24:24.

Well done to all.  It looks like we will have some good competition over the next few months to decide the 2019 champions.  Thanks to Alex Jackson and team for organisation and to Bob Marshall for the race photographs.