The 2018 PH Club Championship came to an end on Saturday with the final event, the Scottish National Short Course XC Championships at Lanark Racecourse, and there were some excellent performances from those members who managed to find their way to the new venue.

Aaron Bennet was first in action once again and he completed his under 16 boys 2k race in 7:46 before retiring to the ever-more salubrious surroundings of the PH Racing Club tent to partake in the various refreshments on offer.

Next up was the women’s 4k race.  The course was pancake flat and Kristin Lownie set off quickly before being pegged back by Karen Kennedy who finished as the 1st PH athlete and 5th V40 in a time of 15:32.  Next home was Kristin, securing the title of PH Club Champion for 2018 in a time of 15:52.  Robyn Morrocco completed her race in 17:18.

In the men’s race, run over the same 4k course, Club Champion Darren Jubb put in a fine performance to finish inside the top 100 of a quality field in a time of 13:02.  Dan Monaghan passed last year’s champion Colin Somerville late in the race to secure overall 4th place in the Club Championship, finishing in a time of 13:40 with Colin only five seconds further back.  The 4th counter for the men’s team which finished 20th overall was Wright Beveridge who crossed the line in 14:44. 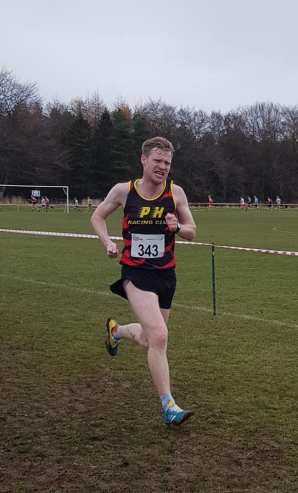 Well done to all who took part and good luck to PH’s Karen Kennedy, Mary Western and Ed Norton who head to Swansea next weekend to represent Scotland in the British and Irish Masters.