PH Racing Club’s male and female teams both put in fantastic performances at the opening fixture of this season’s East District Cross Country League at Stirling University yesterday.  The senior course consisted of a tough 3k loop with the ladies running two laps and the men three.

The ladies team of Karen Kennedy, Robyn Morrocco, Alison Whyte and Zoe Stuart finished in 7th position in the ladies standings for the day.  Kennedy, Whyte and Stuart also topped the table for the ladies masters competition which requires only three counters.  Kennedy finished as 3rd veteran in 25th place overall in a time of 25:22 with all her team mates following within two minutes to complete a superb result for the club.

It was then up to the men to follow this and they did not disappoint, placing 6th in the table above a number of more established clubs.  Top performer was Darren Jubb, 25th in 31:50, with Paul Kieran, Dan Monaghan, Colin Somerville, Ewan Taylor and Wright Beveridge the other counters making up the six man team.  Hill specialist Peter Simpson also had a tremendous run finishing 7th of the PH men in a time of 37:50 to complete the masters team which also finished 7th, with Kieran and Beveridge the other two counters. 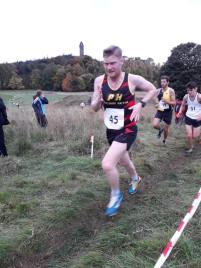 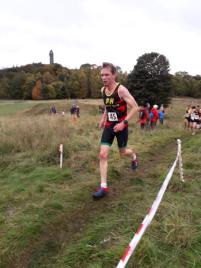 Earlier in the day Aaron Bennet had opened his account for the league finishing his under 15 boys 3.3km race in 13:53.  Thanks as ever must go to the organisers from Central Athletic Club and the East District League.  Hopefully we can maintain this level of performance for the remaining two fixtures which this winter are at Broxburn and Livingston.

On Sunday Iain Taylor was in action at the Green Drive 5 Mile Race in Lytham.  The race incorporated the Lancashire 5 Mile Championships and Taylor finished 18th overall and 2nd V50 in a new age category club record of 29:46.