PH were in top form at the Graham Clark Memorial Race held at Knockhill Racing Circuit on Tuesday evening.  This race is named after the well respected Carnegie Harriers coach and former Scottish international who sadly passed away 14 years ago.

Alison Whyte (26.01) finished 5th female overall, picking up the prize for 1st V40 and was joined among the prizes by Ed Norton (25.10) who collected the V60 prize for the second year running.  It was also great to see Allen Marr don the PH vest for the first time. 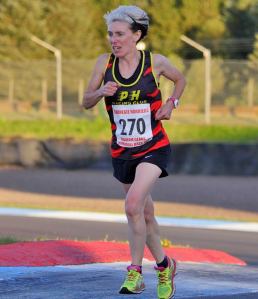 Well done to all the 29 PH finishers – full results can be found here.  Thanks to Carnegie Harriers for organising such an excellent event and to Gordon Donnachie for his superb race photographs.